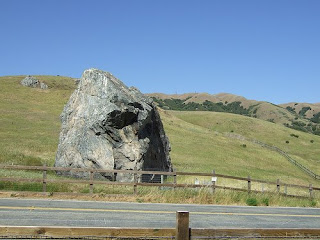 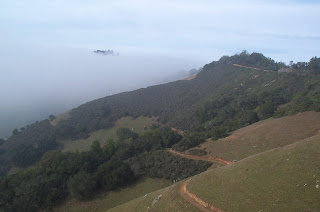 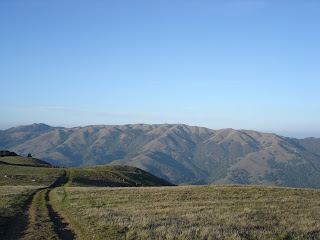 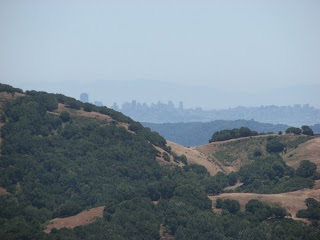 Location
The trailhead to hike Big Rock Ridge is in Lucas Valley, which is in Northern Marin just before Novato. This hike really reminds me of how my idea of where things are is dictated by roads and where towns are in relation to the highway. But once you're up on the ridge, it seems like everything has rearranged itself. Big Rock Ridge is the second highest point in Marin after Mt. Tam, and its views prove it. On a clear day you can see Mount St. Helena and Montara Mountain to the south, east to Mount Diablo and west beyond Mount Wittenberg to the Pacific Ocean. And there are stunning views of closer beauty like Mount Tamalpais, Deer Island, Loma Alta, and Mount Burdell.
History
For decades Lucas Valley was comprised of various cattle ranches, some of which still exist today. In the 1950's and 60's development began, and many tracts of single family homes were built. The developers of Lucas Valley, however, kept the hillsides in mind. Today there are still no telephone poles or satellite dishes on any of the roofs; everything is underground in order to preserve as well as possible the views of the surrounding hillsides.
Lucas Valley is a prime example of residents coming together to fight development and preserve the pristine open space. In 1970, two large ranches to the west of Lucas Valley were slated for development. 750 single family homes were ready to be built. Fortunately, the homeowners association stepped in and reduced the number of homes being built to 472.
A similar story happened in the mid-70s: the California Coastal Commission suggested widening Lucas Valley Road from two lanes to four lanes in order to facilitate access to Point Reyes National Seashore. And at the same time there was a proposal to build a four lane parkway over an undeveloped ridge from Lucas Valley to San Rafael. These roadways would have improved access to the relatively untouched valley, and they'd have increased traffic, noise, and population. But yet again, the residents formed a coalition and stopped the plans dead in their tracks.
With so many threats to the unspoiled open space, the residents of Lucas Valley decided to be proactive rather than fight each battle as it came. So the Marin County Service District proposed buying the land for designated, protected open space. When it went to vote in 1973, an overwhelming 93% voted yes.
Since 1973 Big Rock Ridge and the greater Lucas Valley Open Space Preserve has been privately owned by the homeowners association, managed by the Marin County Open Space District, and open for public enjoyment.
In 2003 the Big Rock Ridge trail became part of the Bay Area Ridge Trail, a 500-mile long trail that circles the Bay Area.
Look at this map of the Lucas Valley Open Space Preserve and its surroundings: http://www.co.marin.ca.us/depts/PK/Main/os/pdf/LucasValleyWeb.pdf
Why I Love It
Big Rock Ridge is almost just-another-breathtaking-panorama story. Note the almost. It's true that Big Rock Ridge's signature pull is that, as it is the second-highest summit in Marin, it has spectacular views of everywhere around. And like all other high peaks, I love situating myself and finding familiar places to look at from yet another vantage point.
But what makes Big Rock Ridge truly special to me is its mystery and the effort necessary to achieve the reward. I say mystery because the first time I hiked it, it was a foggy day. I couldn't see anything. I said, "whoop dee doo" as I trudged along in the wind, unable to see any sort of vista besides blinding white and grey sky. So even though I knew, intellectually, what Big Rock Ridge had to offer, I couldn't really know it. And I think that is mysterious: knowing something is there but being unable to see it or recognize it. Then I went on a clear day and spent a good half hour with my jaw dropped, staring as far as I could see. And the effort: it's steep at times. It's a straight uphill walk to get to the crest. But it is worth it, and the beauty is that much more staggering when you are also staggering. Literally.
Directions
From the San Rafael Transit Center:
Take Golden Gate Transit Route 44 Northbound
http://www.goldengatetransit.org/schedules/pages/Bus-Schedules.php
Get off at Lucas Valley Estates (at Bay Laurel & Lucas Valley Road)
Walk East on Bay Laurel Lane, take a left on Westgate, right on Creekside Drive (don't worry this is only a few blocks!)
Begin your hike at the Luiz Fire Road on the left side of Creekside Drive
Bibliography
flickr.com/photos/ terriem/2458039289/
http://www.panoramio.com/photo/7565505
http://www.ci.novato.ca.us/cd/gp/gpappa.html

Catie Hall
I'm a senior in high school who loves being outside, and who encourages interaction with the sublimity of nature and the humility it provides us!